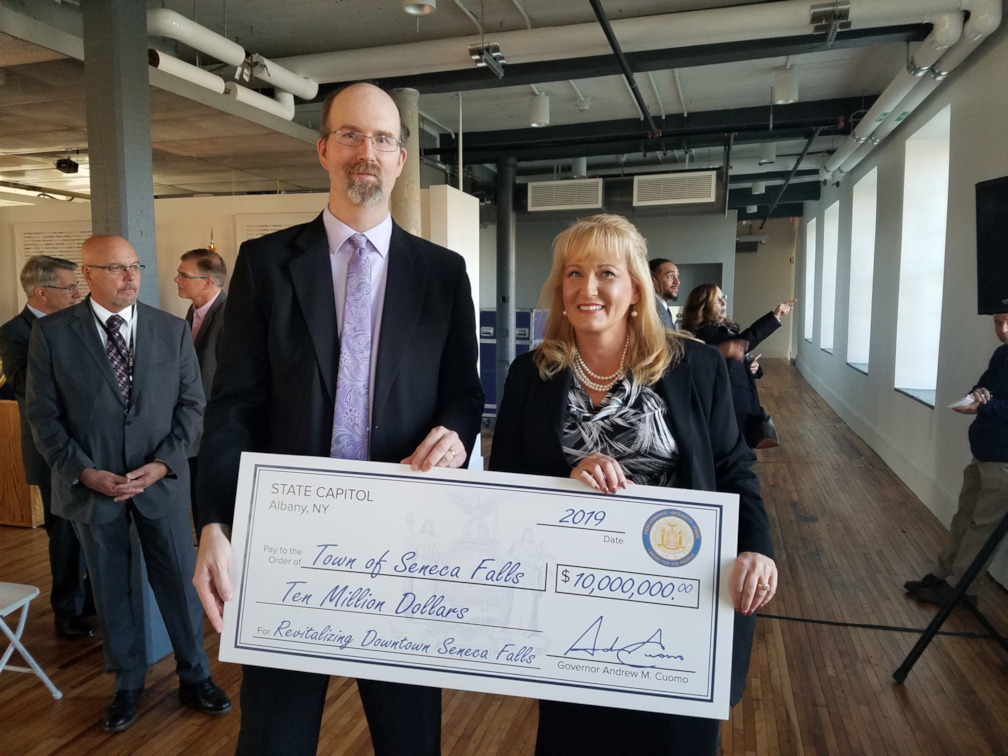 The Town of Seneca Falls is the latest recipient of $10 million under New York State’s Downtown Revitalization Initiative (DRI).

State, county and local officials gathered with Seneca Falls business owners and residents to hear the news at the new site of the National Women’s Hall of Fame. When the announcement was made that Seneca Falls had won $10 million in DRI funding, the crowd erupted with cheers and applause.

“When we gave the Seneca Falls Development Corp (SFDC) the lead in pursuing the DRI, we did so with full confidence,” said Town Supervisor Greg Lazzaro. “We knew our community would be fully represented throughout the application process and this is such an amazing day for the Town of Seneca Falls.”

In late 2017, the SFDC led a renewed charge to pursue the DRI award by holding a series of public workshops and focusing on community collaboration. Coupled with a push to realign the brand and economic development engine of Seneca Falls, the SFDC put several initiatives in motion to better foster regional, State, and commercial interest.

While Seneca Falls was a finalist for the DRI award in 2018, Penn Yann was selected as the region’s winner. Undeterred, the SFDC worked to strengthen their application by securing additional community input and focusing on the enhanced branding and messaging of Seneca Falls.

“One of our key priorities was to better showcase the rich heritage of Seneca Falls while also communicating its promise and potential,” shared Greg Zellers, SFDC Director. “This is why we chose to put forth a homegrown application that was rooted in community collaboration rather than hiring an outside firm. We felt this was the best way to capture and convey the heart and soul of Seneca Falls.” 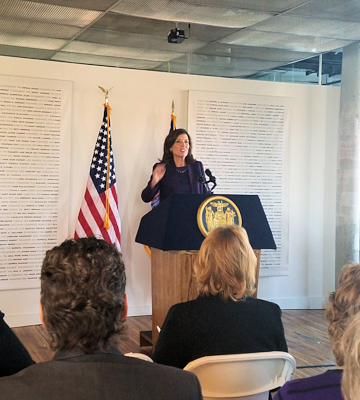 The first monies allocated through the $10 million award will be $300,000 for initial planning. In the coming months, the SFDC will work alongside State officials to create community workshops and programs where businesses and residents can submit proposed projects for consideration.

The State will ultimately decide which downtown projects are funded, and the SFDC plans a series of community gatherings to explain and help facilitate the DRI process.

“Local business owners and residents provided insight, ideas, and a list of challenges they face,” said Joell Murney-Karsten, SFDC Board Chair, “and we want to continue this kind of community-wide collaboration. Not only for the success of commerce, but to also add quality of life benefits for residents.”

While the DRI is intended to focus on downtown revitalization projects, the award has historically become a catalyst for economic development, commercial interest, and growth beyond the downtown corridor.

“I want to personally acknowledge the team of Greg Zellers and Joell Murney-Karsten who spent hundreds of hours on research and preparation for the DRI push,” added Supervisor Lazzaro. “Their commitment throughout the DRI process helped bring us to this remarkable day, and it’s an accomplishment our entire community shares in.”

Zellers further shared that the DRI award is the culmination of ongoing collaboration among the SFDC, the Town Council, local businesses, and residents.

“It’s been a long and challenging road these past few years as we worked to reposition Seneca Falls for economic revitalization, and this award doesn’t signal the end of that push…it signals the start of a new and exciting narrative for our town.”

To help educate and inform the community, the SFDC has published a DRI portal at http://senecafallsdri.com where community members will be able to view the Seneca Falls DRI application and get updated DRI information and insight.

Questions regarding the DRI and the upcoming process can be forwarded to Greg Zellers, SFDC Director, via email at greg@senecafallsdevcorp.org.